But I’m a big believer in “instinctual eating” — but ONLY once you’ve become evolved into enlightened eater and more deeply attuned to your body, emotions and spiritual self (best guess, probably 10% or so of the American population qualify).

In any event, back to the brilliance of beans.

If you haven’t heard, let me be the first to tell you: Beans are a Super Food.

To try and sell their products, advertisers and others throw the term “super food” around way too much these days, which unfortunately dilutes the true magnificence of the term.

To me, a bona-fide Super Food is a food that you would strongly consider ranking in your TOP 50 essential go-to foods, a nutrient-dense food that delivers tons of bang for your buck and can do wonders for your health and wellness. 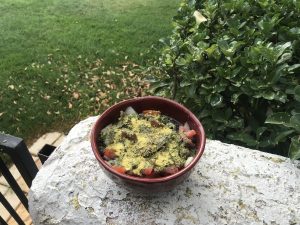 I’m a big fan of rotating your beans and legumes. So one day I might eat black beans, the next day kidney beans, or garbanzo, or Great Northern Beans. Dr. Michael Greger of NutritionFacts.org, researcher extraordinaire, has quoted studies that ranked the mighty LENTIL as the top-ranked bean (known) bean in the world. So I love lentil soup (takes me 25-30 minutes to cook them), and split-pea soup is my favorite.

Godin is sharing his life and marketing expertise while I boil a can of black beans and devote maybe 30 minutes toward breakfast:

Tomatoes: Great source of Vitamin C, but I do cut the jelly seeded part out of to reduce the lectins (per Dr. Steven Gundry and others).

Turmeric: I don’t like the taste of turmeric when I cook with it. Which is strange, because I looooveee Indian cuisine, and turmeric is a staple of their recipes. So apparently I need to have a conversation with an Indian cook one of these days. In the meantime, I don’t put turmeric on my food — instead, I choose to gulp down maybe a teaspoon of turmeric in the morning and another in the evening, and then chase it with a few ounces of water.

Turmeric is highly-regarded for its anti-inflammation and anti-cancer properties, so I’ve made it a usual suspect in my life.

Avocado is a great addition to your bean bowl, but I didn’t have one handy today. Just realize, however, that if you’re a big eater like me, adding even a small avocado can easily put you over 500 calories for this breakfast. Something to bear in mind.

Cucumbers: on the side, I sliced up some cucumbers (great for hydration and my skin, since I play a lot in the sun and have gradually trained my skin to adapt WITHOUT sunscreen.

Balsamic Vinagrette: A ForzaFit/Organic Tank staple. Super beneficial to endothelial function and circulation. Eat it every chance you get, on salads, beets, and I even put it on my cucumbers.

Apple Cider Vinegar: Amazing stuff. Great for digestion because, as more and more of the wisest docs are saying these days, “You’re not what you EAT, you’re what you ABSORB.” I usually go with a couple teaspoons a day, usually before meals.

NattoKinase: a fermented Japanese soy known to be beneficial for circulation and heart health. I consume one tablet every day.

WHY FALL IN LOVE WITH BEANS?

In Mexican and many Hispanic cultures, beans are the bomb.

Americans, not nearly as much — unless we’re eating Tex-Mex style burritos and enchilada smothered in queso (cheese) and sour cream.

I think a lot of people avoid beans, partly because they think they taste bland.

So I must say, if you don’t love beans, then you’re cooking and preparing them all wrong. I highly recommend bringing them to life with the aforementioned herbs, spices and sea salts. Experiment and play with those spices and herbs and Himalayan sea salt. Those herbs, spices and sea salt are not only good for your taste buds but more importantly they empower you with tons of micronutrients, which is where the real nutritional, cell-enhancing excellence tends to live.

Another common reason many Americans avoid beans: Fear of fiber.

More specifically, a fear of flatulence.

For instance, as I sit here typing, 75 minutes after eating 1.5 cups of beans (about 300 calories and 15 grams of fiber), I haven’t experienced the least bit of flatulence. And I have a quick metabolism — so if gas was going to be a problem, it would have moved through my system by now.

Now, 10 or 15 years ago, it would have been a different story on the flatulence front.

But the body has a remarkable ability to heal and adapt provided we exercise patience as much as a fitness freak exercises their muscles.

Because it’s such a fiber powerhouse, beans (among the docs and experts I most trust) are believed to promote a more ideal good-to-bad bacteria ratio in the gut. And we are supposedly hosts to trillions of bacteria in our guts, home to the majority of our immune system and serotonin (mood hormone), among others.

Fiber keeps you regular and helps you detox and expel toxins.

Fiber is huge at helping to slow the absorption of sugars, glucose and fructose into our bloodstream (insulin regulation). The speed of that absorption is key, although fast absorption might be ideal, for example, for a competitive athlete in certain sports. Generally speaking, slower absorption is better, and fiber is one the titans that enables that.

This is a controversial topic and we’re not going to win a Nobel Prize solving it right here today.

But I would estimate that most of you, from the 100-pounder to the (healthy and fit) 200-pounder, probably need maybe 50-85 grams of protein per day. If you’re an elite athlete in the combat sports or the NFL, or a professional bodybuilder, and training intensely (especially two or more times a day), then you’re going to consume more than that. But the vast majority of you are going to watch the Super Bowl and the Olympics on TV — not play in them. Excess and unused protein can be excreted — but it places a lot of strain on the body to digest and metabolize it. In my view today and my research, excessive and unnecessary protein levels over time will prematurely age and damage our cells. They are simply unnecessary — and if you want to be the best you in this chaotic world we live in — I highly recommend getting rid of whatever is non-essential and unnecessary. That is an important principle in life — not just Foodjitsu and healthy eating.

I’m not anti-carbs; I eat them. But by and large, I don’t trust them.

If we were living in a different time, 100 or more years ago, this discussion would be absurd.

The problem today is the mass refinement of carbs, the hidden sugars and synthetic ingredients… that basically have converted and corrupted carbs to someone like me.

Now, it is worth reminding yourself that ALL CARBS ARE NOT CREATED EQUAL. There is a hierarchy there, just like there are for Healthy Fats vs. Unhealthy, and everything in life follows this pyramid-like order. Unfortunately, the vast majority of carbs that I see on the market quality as “fake food” on the Organic Tank scoring scale, which puts nearly all carbs at the bottom of my food pyramid.

Everything you will ever encounter, no matter how amazing, no matter how nutritious or whatever, ALWAYS offers pros and cons. There is a price to be paid for everything. You can’t get the very best for nothing — and if you do, you wouldn’t appreciate or value it for very long, anyway.

Too much water will kill you. Too much Curcumin would be toxic. Swallowing a crazy amount of apple seeds might give you arsenic poisoning. And so on.

Beans are an incredible food — and the only knock I have on them is that they have this unique feature: They are a protein that tends to be relatively high in carbs. In this case, the 1.5 cups of black beans packs nearly 57 grams of carbohydrates.

For someone like me, who maybe eats 100-125 carbs a day (many days decidedly less than that), almost 60 grams of carbs in one sitting is A LOT of carbs.

Carbs tend to stick. And, most importantly and problematic for many Americans, “CARBS ARE A DE FACTO SUGAR!!!!” (A unique Forzaism and phraseology that I coined, by the way, since I love attribution and know a lot of people will like that phrase enough to try and steal it without giving me credit).

But again, black beans (and beans in general) have such a unique nutritional profile. Normally, a food with nearly 60 grams of carbs, you’re looking at maybe 50 percent or often-times 100 percent of those carbs come from sugar).

But in the case of these black beans, only 3 of those 57 grams are from sugar.

Now, if you’re a very sedentary, lazy and inactive person, then those carbs can easily stick to you, and convert to a sugar, some of which (over time) may want to park itself in your body and be stored as fat.

The typical American is eating somewhere in the vicinity of 300-400 grams of carbs per day — which is why some medical pros and scientists have been sounding the alarm and basically calling them, ‘KILLER CARBS.” Again, refined and processed carbs with hidden sugars and synthetic ingredients.

A lot of times, excess carbs will wreak havoc on glucose levels and blood sugar regulation — which can create a ticking time bomb inside the human body.

But because beans are so rich in fiber — fiber is considered a carb!

So when you’re eating a carb rich in fiber, it’s much, much friendlier to the body. That’s one of the reasons why a lot of fruits — especially when you eat and chew the actual fruit rather than juice it — are metabolized differently and friendlier to your body than fruit juices or straight table sugar or refined sugars. Because a lot of fruits that you consume with their natural skin are rich in fiber, so your body absorbs and manages those natural sugars in a much cleaner and healthier fashion.

Consequently, the carbs in beans are really a non-issue, unless you’re grossly over-eating them.

And, for the record, even though I ate 1.5 cups of beans, a lot of you will probably eat less than that — maybe one cup or even a half cup (which is only about 100 calories).

On a different day, I make beans a side-show to a meal. Today, however, since I’ve been doing a lot of cycling and heavier lifting to pack on muscle, I woke up craving beans and treated it almost like a morning cereal.

Probably one of the healthiest “cereals” I could eat!

Soaking your beans for hours — some of my Mexican friends do it overnight — is definitely nutritionally superior.

However, in the interest of time, sometimes I can’t soak my beans and don’t have the hour or so that it takes to cook black beans. In that case, canned beans (preferably organic and in a non-BPA lining) is my go-to. Ideal? Nope. But even though I’m the Organic Tank, and you’re organic-conscious, we don’t live in a bubble. Life, with all its moving pieces is never going to be perfect. What is vital, is that we always make the best of what we have today, in this moment. Play the hand you have right in front of you, right now. Plant seeds and exercise patience, however, so that tomorrow you will be playing with an even better hand and… and then you will be doing the very best you can in that instance, too.

If canned beans is the best you can do today, start right there.

If you tell the average American, a non-Hispanic, “I ate beans for breakfast,” they’ll think you’re a little looney.

But what is crazier: Eating a healthy breakfast or eating one packed with unhealthy sugars?

Every bite we are faced with a choice: Loving and investing in yourself with each bite, loving yourself enough to discipline yourself…

Being a slave to a sugar addiction that runs our life.