Though I am presently writing a book chronicling the Greatest Lessons Learned from my 31-year dance with nutrition for athletic performance (due out in the next six weeks!) and though ForzaFit™️ aims to multiply the number of Mindful & Enlightened Eaters around the world … and though my teammates didn’t nickname me “The Organic Tank” for nothing ……

WHAT does a combat sports athlete, Master Weight-Cutter and age defyer eat each day — and WHY do I target certain foods? Here’s a sneak peek inside the “FoodJitsu” mental calculus of 3x Brazilian Jiu Jitsu Masters World Champ Frankie “The Organic Tank” Forza and his generally higher-fat nutrition choices; The Organic Tank — who has…

Up to 3,500 Calories A Day: Still Losing Weight & Feeling Great

The Golden Rule of Grubbing: WHEN LOSING WEIGHT, NEVER STARVE YOURSELF.

Always eat smart and enjoy food. Eat like A Champ! Eat like A King! That’s the only way to sustain a healthy diet over the long haul.

I probably average between 2,500 and 3,500 calories daily. On days when I workout longer and more intensely, I consume more calories and more water. On lighter days, I eat less.

When it’s all said and done, I will have lost 14.5 pounds over an 11-week stretch and hover around 4.5 percent body fat. Bear in mind, my frame was already quite lean when my weight cut to 138.5 pounds began. Me losing 14.5 pounds is like an overweight person losing 80 pounds; it’s extremely difficult to cut this much weight on an already lean frame yet still be in peak physical condition, be able to step on a scale, make the weight and then have three or four intense grappling matches against super experienced and game opponents. You have to really know what you’re doing to pull this off and master it.

And after 31 years in the martial arts game, I do. Easiest weight cut of my life, in fact. At 45, and proud of the fact that throughout my entire career I have never taken a steroid, TRT nor HGH in my life, I recover extremely quickly in between hard intense workouts. All natural and predominantly organic is the way to go.

I imagine the entire training camp leading up to the IBJJF Masters World Championships in late August will be vegan. No reason to eat meat. Nothing against carnivorism, per se, just a personal choice. I believe the weight comes off easier this way. Requires less energy to digest food — which means more energy available for other things. I employed an all-vegan diet the last time I cut this much weight — seven years ago, and it boosted my cardio and recovery then, too. But I wasn’t as sharp or scientific with the diet back then. There was much to learn. And so on tournament day — at the IBJJF World Championships (brown belt) — the weight cut on Competition Day and the super-small meals I was eating meant that by the fourth round of the tournament I had little left in the tank. 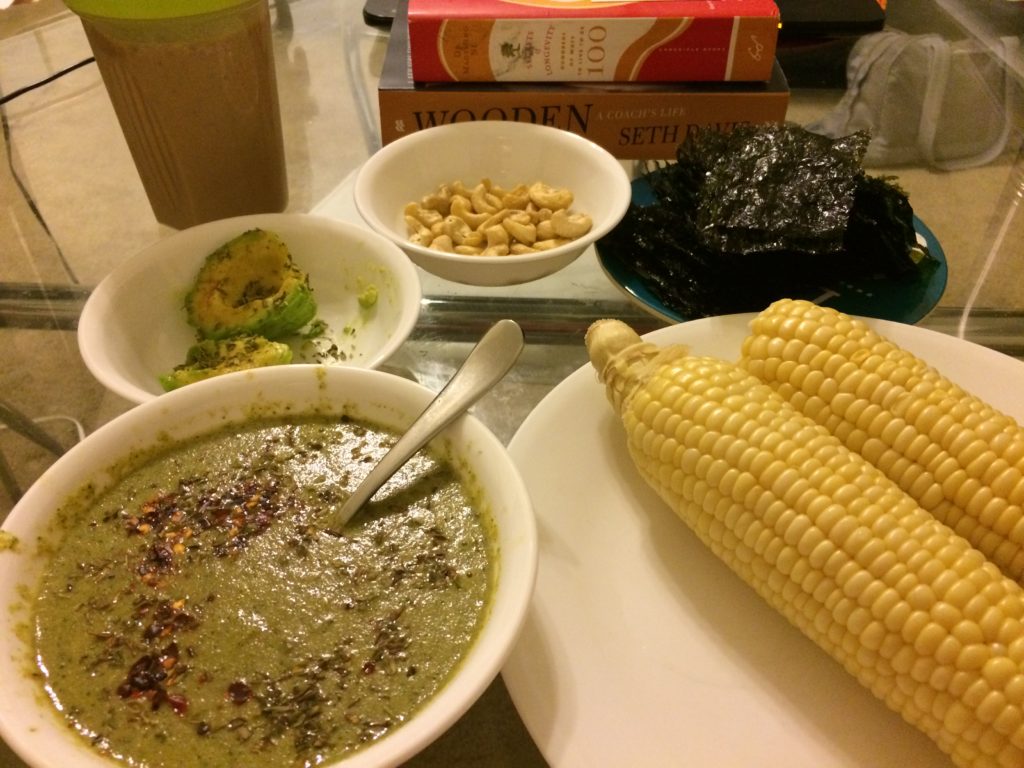 Corn on the cob (big fan of corn for horsepower. Think about all those super-strong, corn-fed wrestlers and football players in the midwest, and in Mexico, producers of some of the greatest distance runners in the world and boxers who are always super-tough and show great cardio);

Avocado with sea salt; I rank Avocado as a Top 10 food. Lots of fat, great energy source, tasty, filling. Sea Salt: I used to demonize salt but especially living in the desert, I try to get at least two or three teaspoons a day. Need it. Great conductor of energy and electricity in the body, which translates to better firing of the muscles. In my mind, at least.

Roasted seaweed: great for hair, skin. Dermatologist recommended. Oh, and it’s green. Green is usually good:-). Packed with so much good, including magnesium (hugely important), Vitamins A & K, manganese, phosphorus and iron. Quite frankly, I just love the crunchy texture of it as well.